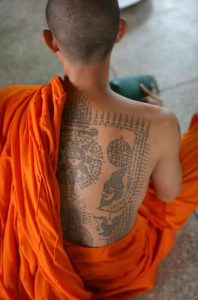 I would like to tell you about my friend Jack – one of the most extraordinary people I’ve ever met. Jack is from Thailand by origin and he is very grateful to his family for two “western” things: his name and the fact that every Friday they eat pizza at home.

In his youth Jack wasn’t dedicated to his studies at all, on the contrary – he was dazzled by the shine of night clubs, parties and ladies. He worked as a DJ in a disco and spent every single night there. Surrounded by new acquaintances and a lot of alcohol, Jack was sure he belonged to that place.

In the meantime his mother was deeply worried about him. She took her courage in both hands and urged her son to think seriously about his future. Touched by his mother’s words, enfeebled by her kindness and concern, Jack (who usually was a disobedient young man) was determined to carry out his  mother’s request.

But what was the right way to fulfill his duty and change his life?

All in a flash he saw it. He would become a monk at least for a month. Jack thought that this time would be enough to think over his actions, to change his attitude toward life, priorities and values. So he left his home, family and friends and entered in a monastery in Thailand. But the first step in that direction completely changed everything. He got to the core of his soul and mind.

When I met Jack 3 years ago he was still a monk. That was his ninth year. But at that time he was a teaching monk who travelled all over the world to teach people how to be happier, healthier and a little bit better to each other. Jack was motivated to go beyond everyday rudimental needs and to understand what makes people tick.

I asked him why he was still a monk after so many years. He explained that he didn’t deserve his mother’s love yet. He didn’t miss the night life, but his mother’s hug and the pizza every Friday.